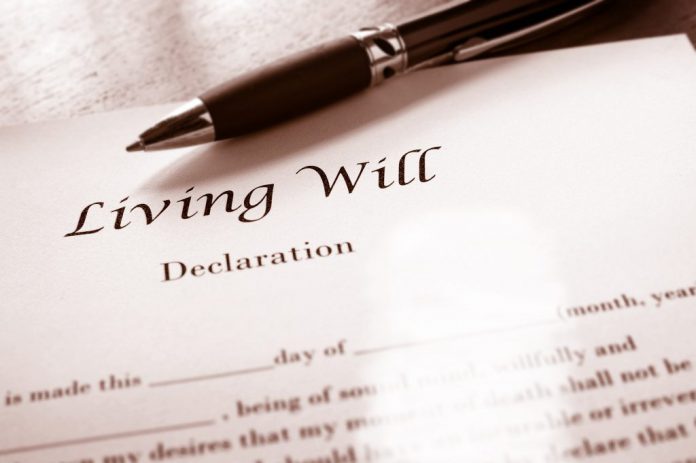 A living will, also called an advance healthcare directive, spells out a person’s preferences for life-sustaining medical treatment.

Even though advance directives have been promoted for nearly 50 years, only about a third of U.S. adults have them, according to a recent study. People with chronic illnesses were only slightly more likely than healthy individuals to document their wishes.

A living will outlines preferred medical treatments and procedures such as ventilators and feeding tubes, and measures for pain relief, resuscitation and even withdrawal of mechanical life-support. At a slightly lesser level, a formal “DNR” order is still standard in hospitals, signed by a family member, directing medical staff “Do Not Resuscitate.”

While there is no legal framework for a living will in Cayman – or creation of a “lasting” power of attorney – the document can help, says Lucy Diggle, senior counsel at Walkers and a leading authority on living wills.

She explains that while Cayman has little legislation for any of the iterations, a formal statement can aid achievement of some of the common goals.

“At present, there exists no legislative basis on which living wills can be created and enforced in the Cayman Islands,” she says. “Should a person choose to execute a living will, expressing that they wish, for example, to refuse medical treatment, medical personnel will still be subject to legal and ethical obligations to treat such a person.

“As such, it may be difficult for persons looking to adequately prepare for such an occurrence to justify the execution of a living will.”

Wills are locally recognized under the Wills Law (2004 Revision), the Succession Law (2006 Revision) and the Probate and Administration Rules (2008 Revision), Diggle says.

However, like the living will itself, Cayman also has no laws to create a “lasting power of attorney,” the permanent transfer of POA to another person.

“However,” she says, the Grand Court “has the power, on application by the relevant persons, to appoint a receiver or guardian to act on behalf of the person in a state of mental impairment.”

Mental impairment is addressed by the 2013 Mental Health Law, which describes “a state of arrested or incomplete development of mind, which may or may not be due to a trauma or injury and includes significant impairment of intelligence and social functioning and which may or may not manifest itself in abnormally aggressive or seriously irresponsible conduct.”

While the “MHL” does not address physical impairment, the law, Diggle says, “provides the court with the power to act on behalf of the person who is in a state of mental impairment.”

That may consist of arranging for another person to deal with the property of the mentally impaired person, she says, meaning the court may appoint a guardian.

“There have been no reported cases through the court in relation to [living will] enforcement,” she says. “However, as their validity has not been tested through the court, one could argue that the provisions of a living will would be enforceable under particular circumstances – on a case-by-case basis.”

Diggle indicates, however, that local courts were likely to look with favor on formal legal statements regarding medical preferences.

“While living wills are not yet legally enforceable, if immediate family members have a written expression of wishes of their loved one who is in a state of mental impairment, it will certainly provide guidance when making decisions, such as whether to maintain the provision of life-supporting treatment,” she says.

“It is best practice to engage Cayman Islands legal counsel to draft the document in a clear and concise manner. [If] the validity of a living will [were] ever to be challenged, an argument in favor of potential enforcement of the terms of the document could be the fact that independent legal advice had been sought regarding the terms and consequences of executing such a document,” she says.
“It is, undoubtedly, a subject that many would rather not dwell on; however, a living will may serve as a means of easing the emotional burden on those held responsible for your care.”