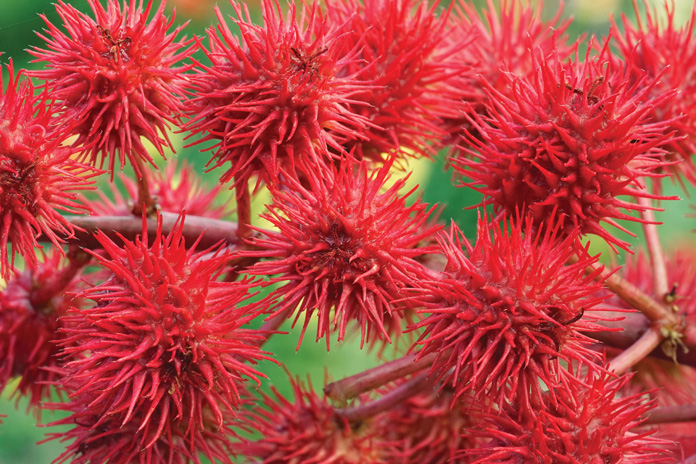 While most of Cayman’s flora is a lush library of beautiful plants, some of the island’s vegetation can be surprisingly harmful. Here are a few examples of local plants that should be avoided and what you should do if you do come into contact. 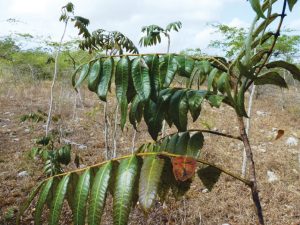 Commonly found as a small shrub around ankle height but also as a thin, rangy bush of 6.5 feet in height and occasionally as a full-sized tree. Often found in overgrown pastureland, Maiden Plum usually consists of a narrow stem with rough, vertically fissured bark, 1-8 feet tall, with a palm-like cluster of compound leaves at the top.

Easily identified by distinctive glossy, waxy leaves with serrated edges. The leaves are generally dark olive green in color, occasionally have black spots and are arranged in opposite pairs, with a single leaflet on the tip.

This fragile plant can be damaged by even slight contact which results in the release of an odorous and highly caustic sap, which has the potential to permanently stain clothing black, and can penetrate human skin. Most people will have an allergic skin reaction to contact.

Although not immediately irritating, the contacted skin will develop into a red welt after 24 hours, becoming increasingly inflamed and sore over the following weeks, and developing into a wet, raw, open sore. Sap can be transferred unknowingly from the hands to the face and eyes, by wiping sweat from the face, and scratching can spread the itch to other areas.

Contact with the leaves does not have any immediate effect, so it is easy to walk through a stand of Maiden Plum without knowing it. If you do realize you have just brushed against the plant, rubbing the skin vigorously with a dry flannel or other cloth may remove transferred oils and prevent a reaction.

Sap cannot easily be removed from the skin by washing. Some neutralizing effect has been observed by applying acidic fruit juice (lemon and lime) directly to the skin as soon as possible after contact; by application of 1% Hydrocortisone cream; or by taking an anti-histamine. 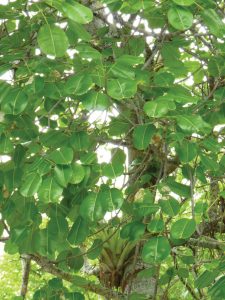 Manchineel is common in the Cayman Islands and is most often encountered as a compact bush of 3 – 6.5 feet meters in height, or as a fully-grown tree. Easily identified by its distinctive leaves: round, finely edged, with long thin stems – resembling miniature tennis rackets. Their fruit resemble miniature apples – green when young, turning yellower as they ripen, with a pleasant sweet-smelling fragrance.

This large tree is usually found on the edges of wetlands and behind beach ridges. The trunk is usually quite pale, creamy white, with the bark broken by vertical and horizontal fissures into a crazed pattern. The leaves are variable in size, but in Cayman, typically about 2 inches across, roughly heart shaped, somewhat glossy, and held on long yellow-green leaf stalks, often as long as the leaf itself. If you look very closely at the leaf margin, you will see tiny teeth which distinguish Manchineel from a local Wild Fig that has otherwise similar leaves.

If it rains never take shelter under a Manchineel trees as water dripping from the leaves will carry the sap with it, causing blistering of the skin.

If you are exposed to Manchineel sap, wash with soap and water as soon as possible to remove any plant latex. Try not to spread the sap to other areas of the body. Seek immediate medical attention. 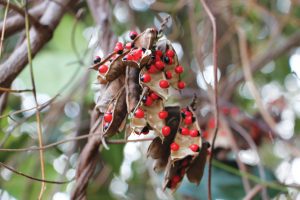 Also known as Licorice, Rosary Pea and Crab’s Eyes, this is a very common invasive vine in Cayman. While the roots contain glycyrrhizin which also occurs in commercial licorice, the seeds, used for jewelry and in lamps, are extremely poisonous if eaten. Favoring thickets and woodland near the sea, the plant is easily identifiable due to its red seeds with a black spot covering one end.

The woody vine can grow to 10 – 20 ft high when supported by other plants, and features feather–like small oblong leaves and small clustered flowers in red, purple or sometimes white.  The fruit is a legume about 3 cm long containing hard seeds about 1 cm long.

The seeds of this plant are poisonous, as they contain the natural toxin abrin, which is similar to ricin. However accidental exposure is unlikely unless you chew or swallow the seed. The poison acts only through the blood stream and a small amount introduced into a wound could be fatal. It is destroyed by digestive juices and boiling.

There is no specific antidote for abrin poisoning, and treatment is mainly supportive with intravenous fluids and correction of electrolyte abnormalities. As the cause of death in most reported cases appears to be renal failure, hemodialysis may be used if poisoning is severe. Never crush or eat the seeds of this plant. 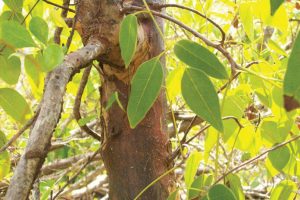 The Poison Tree is a small to medium tree or large shrub with reddish-brown shedding bark which flakes into large plates. The flowers are greenish-yellow and the fruits orange-yellow. The leaves are 9-10 inches long, with 5-7 per stem, and are a dark glossy green, sometimes with black blotches as they age.

The tree is of the same family as Maiden Plum and Mango, and has a poisonous sap produced by its trunk and branches.  The sap causes a red rash or skin blistering similar to that caused by poison ivy, while smoke from burning wood is irritating to the eyes and throat.

If you come into contact with the sap, rinse skin with lukewarm water immediately and wash the clothing you were wearing. Try not to scratch and do not pop blisters. To relieve itching take baths in colloidal oatmeal or aluminum acetate and apply calamine lotion or a cool compress. Talk to your doctor about taking antihistamine pills to reduce itching. If you experience trouble breathing or intense swelling, go to the ER. 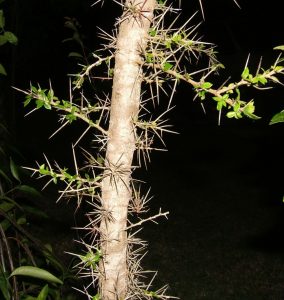 The Shake Hand Tree is found in Grand Cayman and Northern Bahamas. It grows in dry thickets and woodland, and is a shrub or small tree, which has branched spines protruding from its trunk and old branches. The tree has dense foliage, with small sharply pointed holly-like leaves and small inedible red berries.

If you grab onto the trunk of the Shake Hand tree, you will be pricked by the sharp spines and be left shaking your hand – as the name suggests!

If you are scratched by the shake hand tree, or any thorny plant, wash the wound with mild soap and water. If any thorns have broken off into the skin, remove with tweezers, or in the case of very small spines apply a layer of glue and gauze, allow to dry and peel off. Use a cool water compress to soothe the skin, or talk to your doctor about hydrocortisone creams or antihistamines to relieve itching and discomfort.

The castor bean plant is a wide-branching shrub 2-5 m tall, with watery sap and long, glossy, long-stalked leaves. The fruit is usually a spiny capsule containing shiny bean-like seeds which contain the water-soluble toxin, ricin, which is inactivated by heat. If castor beans are chewed and swallowed, the released ricin can cause injury.

The plant often appears on traditional healing plant lists as castor oil was taken internally as a laxative, and sometimes to treat coughs and colds. Externally, the oil could be used for sore throats and ear pain, and the leaves were used on boils or to extract heat.

Injection or inhalation of material containing ricin are the main causes of death from this toxin, but the seeds can be fatal if swallowed. Symptoms of ricin ingestion can begin within a few hours and include burning in mouth and throat, difficulty breathing, abdominal pain, fluid in the lungs, bloody diarrhea and respiratory failure and death.

No antidote exists, so avoid exposure. If you are exposed seek medical attention immediately. Treatment will involve supportive medical care such as assistance breathing, intravenous fluids, medication for symptoms, flushing the stomach with activated charcoal or washing eyes with water. According to the CDC, people have been poisoned with ricin after eating castor beans, but most cases of eating castor beans do not result in poisoning, because it is difficult to release the ricin from castor beans. Also, ricin is not as well absorbed through the gastrointestinal tract when compared to injection or inhalation.

Sheltering from a storm: Public shelters

Have a plan in place for Hurricanes

What to do in a tsunami

HSA encourages women to protect themselves from cervical cancer

Social media: How much is too much

This morning, just after your eyes popped open, what did you do? Did you kiss your spouse, walk on the beach, enjoy a quiet...