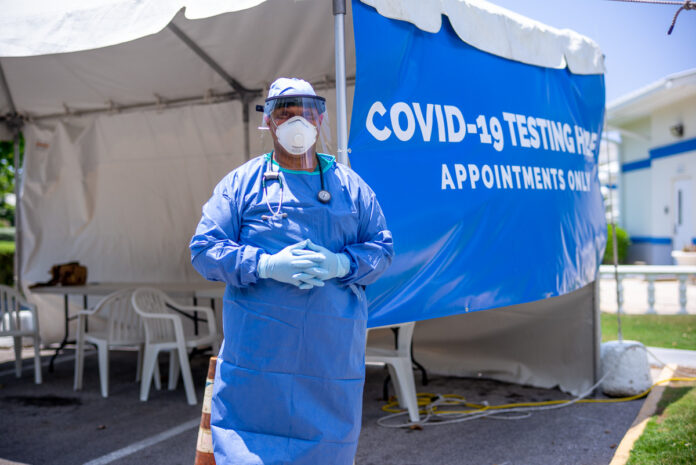 A look back at the crisis with Lizzette Yearwood, chief executive of the Health Services Authority.

As the world has grappled with the COVID-19 pandemic, the Cayman Islands has found itself in an enviable position of being relatively free of the virus.

The local economy opened after a period of lockdown and, as of the summer of 2021, people on the islands have been able to enjoy daily life almost as normal.

of business, particularly the hospitality industry, the health of the population has been vigorously defended as the deadly coronavirus sweeps across the globe.

This has been largely thanks to the foresight, diligence and dedication of healthcare leaders, and the medical and support teams, in both the public and private sectors.

Lizzette Yearwood, CEO of the Healthcare Services Authority (HSA) lauds the entire effort, which has been exceptional during unprecedented circumstances.

From the very beginning of the COVID outbreak, when the virus was first detected in China in 2019, the HSA was monitoring the disease.

“Even before more developed countries started putting together strategies to ensure the safety of their populations, the HSA’s team was daily scouring epidemiological data, monitoring global sources, consulting international agencies and quickly and quietly, away from the public spotlight, deliberating strategy to ensure the health sector had an effective plan and resources to support the Cayman Islands response,” says Yearwood.

The hospital command centre was activated and a medical task force was organised in January of 2020. By the following month, sub-teams were established to focus on the responsibilities of protecting the health and well-being of the population.

“The Health Services Authority, the office of the Chief Medical Officer, the Public Health Department and the Medical Officer of Health were involved in the early planning and coordination,” says Yearwood. “Shortly afterwards, when the National Emergency Operations Centre (NEOC) was activated, they were joined by a larger multi-sectoral team of representatives across the government, the private sector and other non-governmental organisations.”

The team watched with increasing concern the devasting impact that COVID-19 had on the population of China and then its initial spread to Italy.

“It became clear to us that, as the national healthcare system of the Cayman Islands, we would become the cornerstone of the nation’s preparedness and response to this new and evolving threat,” says Yearwood. “Additionally, this was a novel virus with no known cure or vaccine, which meant that we needed to ensure we placed ourselves in a somewhat advantageous position to mitigate the impact of the virus on our islands, through early planning.”

With Cayman’s easy accessibility by travel to many regions of the world, it was clear that it was a matter of when, not if, the virus would reach the islands’ shores, prompting swift government action.

The framework was now in place to mobilise the healthcare system quickly and efficiently.

“We coordinated the health- sector response including clinical coordination, procurement and supply chain management, facility planning and staffing
to ensure the Cayman Islands response was adaptive to this global public health crisis and the worrisome prospects of the susceptibility of the population, as most people have little or no immunity to a pandemic virus,” says Yearwood.

Even with very little epidemiological or other information to rely on, the HSA team poured over all available data that emerged, plotting every possible scenario as part of its comprehensive strategy.

This was followed by the flu clinic and flu hotline being established as well as setting up a respiratory unit to care for the most severe patients.

Under the guidance of the NEOC, a team was formed to establish a field hospital, coordinate a strategy for partnership with regional territories to secure additional staffing, built a partnership with Cayman’s three hospitals and the private health sector community.

The aim was to develop a coordinated health-sector response strategy, and what would be one of its most significant challenge, procure personal protective equipment and other supplies in an increasingly competitive global marketplace with limited stocks.

THIS HAS BEEN AN EXTRAORDINARY TIME, BUT WE HAD AN AMAZINGLY EXTRAORDINARY TEAM AND THAT’S WHY EVERY DAY THEY ARE TRULY HEROES. – Lizzette Yearwood, HSA

Under the direct oversight of the Chief Financial Officer, the HSA also pulled together a broad-based team with influence, connections and experience from the Governor’s office, across government agencies and the private sector, in conjunction with Health City and Doctors Hospital, along with other agencies and partners globally.

This team’s purpose was to ensure the Cayman Islands would have the resources and supplies necessary for a robust health- sector response for patient care and the safety of staff.

The HSA and partners were at the forefront of developing the national strategic response effort, with other aspects including the formation of the COVID-19 taskforce, testing and contact tracing, mental health support, outreach care packages for people in isolation, and the vaccine roll-out.

Cayman’s COVID response took another leap forward in June 2021, with the introduction of technology to conduct genome sequencing.

This advanced technology enables the identification of various strains of the virus. Additional benefits include the management of other medical conditions, and in forensic work.

Like all frontline workers, medical personnel and support staff have carried a heavy burden throughout the COVID response.

“Amidst the heart-wrenching scenes and news reports from other countries of the impact of the virus on healthcare workers, HSA staff remains committed to their profession and the people of these islands in putting country above self and protecting the most vulnerable,” says Yearwood.

Many who were directly involved in work with patients had to sacrifice time with their own families in order to protect them from possible infection. moving out of their homes into staff accommodation.

“Every hospital worker had a role to play in pushing back against COVID-19,” says Yearwood. “While doctors and nurses are often put into the spotlight and rightly so, there are many other behind-the-scenes staff who continue to do their jobs at the risk of being infected and (possibly) having to make the ultimate sacrifice of their lives, given the experience in other countries.”

As the medical community keeps a firm eye on the unfolding situation with the virus around the world, efforts to keep Cayman free of local transmissions remain vigilant.

And with no immediate end in sight of the pandemic, it seems the territory is facing a long-haul situation, in which, as of August 2021, two people had died from COVID-19 locally.

“I have never before been more proud of our healthcare workers as I watch them face their own fears, and yet choose to put their fears aside and work tirelessly, addressing every new change and hurdle, to ensure every patient is provided with exceptional care,” says Yearwood.

Benefits of the COVID-19 vaccine

In recent years the Cayman Islands have experienced extreme destruction from hurricanes so it is essential to be prepared for storms. Hurricane Ivan devastated Grand...

A look back at the crisis with Lizzette Yearwood, chief executive of the Health Services Authority. As the world has grappled with the COVID-19 pandemic,...

How much is too much? Knowing recommended intakes of certain nutrients can help consumers understand food nutrition labels and make healthier choices. Here are four...